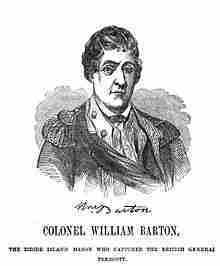 William Barton (1748–1831) was an officer in the Continental Army during the American War of Independence who retired with the rank of colonel. He later served as adjutant general of the Rhode Island militia.

Barton was born in Warren, Rhode Island on May 26, 1748. He worked as a hatter in Providence, Rhode Island. In 1771, he married Rhoda Carver. In 1775, he enlisted in the Continental Army as a corporal. He fought in the Battle of Bunker Hill. On August 2, 1775 he was appointed the adjutant of Richmond’s Rhode Island Regiment. He was promoted to captain on November 1, 1775.

In late June and early July of 1777, as a major in the Rhode Island state troops, he planned and led a raid on British headquarters, capturing Major General Richard Prescott. On the night of July 10–11, with 38 men and six officers in five whaleboats, Barton crossed Narragansett Bay, passed unobserved by three British frigates, and, landing about half way between Newport and Bristol Ferry, went to the farm house where Prescott had his headquarters. The guards were surprised, the door of Prescott’s room was broken in, and the general was hurried away half dressed and taken to Warwick Point, and afterward to Providence. For this exploit, the Continental Congress gave Barton a sword and passed a resolution honoring his service.

Barton was promoted to lieutenant colonel on November 10, 1777 and was made colonel of Stanton’s regiment of the Rhode Island Militia with “rank and pay of colonel in the Continental Army” upon the resignation of Colonel Joseph Stanton, Jr.. He was gravely wounded in the thigh while trying to rally American militia to attack the rear guard of a British raidng party that burned parts of Bristol and Warren, Rhode Island, on May 25, 1778. He never fully recovered from this injury, but did return in June 1779 to lead a company of light infantry operating in boats in Narragansett Bay. He served until the end of the war.

In 1783 Barton became an original member of the Rhode Island Society of the Cincinnati.

When Rhode Island ratified the Constitution of the United States in 1790, Barton was sent to New York to notify George Washington.

He helped to found the town of Barton, Vermont. Subsequently, Barton was successfully sued in court for selling the same land to two different parties. He was sued in court and lost. He refused to pay this debt. For this he was ultimately confined to the debtors’ prison in Danville for 14 years, starting at the age of sixty-four. At the age of seventy-seven, he was released at the initiative of the visiting Marquis de Lafayette, who agreed to pay the balance of his debt. 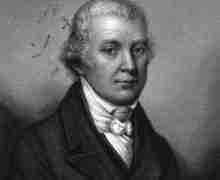