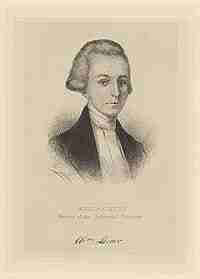 William Duer (March 18, 1743 – May 7, 1799) was a British-born American lawyer, developer, and speculator from New York City. A Federalist, Duer wrote in support of ratifying the United States Constitution as “Philo-Publius.” He had earlier served in the Continental Congress and the convention that framed the New York Constitution. In 1778, he signed the United States Articles of Confederation.

Duer was born in Devon, Great Britain in 1743. He was the son of John Duer, a planter of Antigua in the West Indies, who had a villa in Devonshire. His mother was Frances Frye, daughter of Sir Frederick Frye, who held a command in the West Indies, where she married John Duer. After being sent to Eton, and while still under age, he was put into the army as ensign, and accompanied Robert Clive as aide-de-camp on his return to India as governor general in 1762. As he suffered severely from the climate, Lord Clive sent him back to England, where he remained five years until his father’s death, upon which he inherited his father’s estate.

Having left the army, he went to Antigua, and thence to New York State, for the first time in 1768, to arrange for a regular and constant supply of lumber for his plantations in Antigua and Dominica. As a planter, he traded extensively with Philip Schuyler, who persuaded him to move to New York early in the 1770s. On a previous trip to the area, he had purchased tracts of land on the upper Hudson River near Albany. The area, known as Fort Miller, served both as Duer’s first residence and as the site of his early financial ventures. Duer set up sawmills, warehouses, and a store. In 1773 he went again to England and obtained a contract to supply the Royal Navy with timber for masts and spars. By 1776, had built a moderately successful mercantile business based primarily on lumber production.

Duer was originally a somewhat reluctant Whig, but he became a member of the Provincial Congress in 1775; he was one of the committee which drafted the original New York Constitution the next year; a member of the New York State Senate in 1777-78; and a member of the Continental Congress in 1778 and 1779. He married Catherine Alexander, daughter of Major General William Lord Stirling Alexander, in 1779, and returned to private business the same year, in partnership with John Holker, the French commercial agent. He also did well out of supplying the American army, under contracts arranged for him by Robert Morris.

He was a prominent speculator after the peace; he was also elected to the New York General Assembly in 1786. When Alexander Hamilton, Schuyler’s son-in-law, became first Secretary of the Treasury in 1789, Duer became the first Assistant Secretary. He continued to speculate in American bonds, including the failed Scioto Company scheme to buy up the American debt to France at a discount. He went bankrupt as a result of the Panic of 1792, and remained in debtor’s prison for the rest of his life. His failure has been cited as a cause of the panic, reportedly the first in New York caused by speculation.

He married Catherine Alexander, second daughter of General William Alexander, the claimant of the Scottish earldom of Stirling, and a major general in the Continental Army during the American Revolutionary War. The marriage took place at Alexander’s country seat, “The Buildings,” near Basking Ridge, New Jersey, which was designed to imitate the residence of an English nobleman, with all the appointments of an English country seat. Catherine was descended from James Alexander, the De Peysters, Livingstons, and Schuylers, and occupied a prominent place in the society of the period.

William Duer appears as a major character in The Whiskey Rebels, a historical novel by David Liss (Random House, 2008).