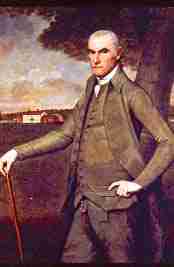 William Floyd (December 17, 1734 – August 4, 1821) was an American politician from New York, and a signer of the United States Declaration of Independence.

William Floyd was born in Brookhaven, New York Long Island, into a family of English and Welsh origins and took over the family farm when his father died. His great-grandfather Richard Floyd was born in Brecknockshire, Wales in about 1620 and settled in the Province of New York. William Floyd was a member of the Suffolk County Militia in the early stages of the American Revolutionary War, becoming Major General.

On July 4th, 1787 he was elected an Honorary Member of the New York Society of the Cincinnati.

In March 1789, he was elected to the 1st United States Congress under the new Constitution as an Anti-Administration candidate and served until March 3, 1791.

Floyd was a presidential elector in 1792, voting for George Washington and George Clinton.

William Floyd, for whom the town of Floyd, NY is named, became a resident of Oneida County in 1794. He is also buried there.

In 1795, Floyd ran for Lieutenant Governor of New York with Robert Yates on the Democratic-Republican ticket, but they were defeated by Federalists John Jay and Stephen Van Rensselaer.

Floyd was again a member of the State Senate (Western District) in 1808.

In 1820, Floyd was again chosen a presidential elector, but did not attend the meeting of the electoral college, and Martin Van Buren was appointed to fill the vacancy.

In the 1820 Census the aging William Floyd (he was 86) remained the largest slaveholder in New York with 6 slaves. Floyd was the only person who had been counted as a slaveholder in the past. In addition 2 free black residents lived in his household. The free female was 14-25 years old and likely had been emancipated while her mother remained enslaved in the household. The other free black was a male older than 45. Perhaps he was married to the enslaved female over 45 in the household, as such arrangements were not uncommon among New York slaves.

The William Floyd House, the family home, is located in Mastic Beach, is part of Fire Island National Seashore and is open to visitors. The home is located in the middle of extensive woods, grassland and wetlands.

There are several places and institutions named after William Floyd, including: