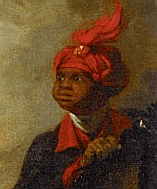 William “Billy” Lee (1750{spaced ndash}1828), also known as Will Lee, was George Washington’s personal servant and the only one of Washington’s slaves freed outright by Washington in his will. Because he served by Washington’s side throughout the American Revolutionary War and was sometimes depicted next to Washington in paintings, Lee was one of the most publicized African Americans of his time.

Born circa 1750, Lee was purchased on May 3, 1768, when he was just a teenager, by George Washington, as described in Washington’s account book as Mulatto Will, from the estate of the late Colonel John Lee of Westmoreland County, Virginia for sixty-one pounds and fifteen shillings. William kept the surname “Lee” from this previous owner. Also purchased at this time was William’s brother Frank, as well as two other slaves. Washington paid high prices for William and Frank, as they were to be household slaves rather than field laborers. William and Frank were often chosen to serve as domestic servants, who were given responsibilities and privileges most slaves never enjoyed. Frank became Washington’s butler at Mount Vernon, while William served in a variety of roles, including Washington’s valet or manservant. As valet, Lee performed chores such as brushing Washington’s long hair and tying it behind his head.

Washington was a frequent fox hunter, and Lee became his huntsman (the person in charge of the hounds), a role that required expert horsemanship. In his memoirs, Washington’s step-grandson George Washington Parke Custis described Lee during a hunt:

Will, the huntsman, better known in Revolutionary lore as Billy, rode a horse called Chinkling, a surprising leaper, and made very much like its rider, low, but sturdy, and of great bone and muscle. Will had but one order, which was to keep with the hounds; and, mounted on Chinkling … this fearless horseman would rush, at full speed, through brake or tangled wood, in a style at which modern huntsmen would stand aghast.

Before the Revolutionary War, Lee often traveled with Washington to the House of Burgesses in Williamsburg, or on journeys such as a surveying expedition to the Ohio Valley in 1770 and to the First Continental Congress in Philadelphia in 1774. Lee served at Washington’s side throughout the eight years of the Revolutionary War, including the winter at Valley Forge and at the siege of Yorktown. According to historian Fritz Hirschfeld, Lee “rode alongside Washington in the thick of battle, ready to hand over to the general a spare horse or his telescope or whatever else might be needed….”

Lee’s wife was Margaret Thomas Lee, a free African American from Philadelphia who had worked as a servant in Washington’s headquarters during the war. Although slave marriages were not recognized by Virginia law, in 1784, at the couple’s request, Washington tried to arrange having Margaret move to Mount Vernon to live with her husband. Whether or not she ever came to Mount Vernon is unknown.

In 1785, Lee injured a knee while on a surveying expedition with Washington. Three years later, while going to the post office in Alexandria, he fell and injured his other knee, rendering him seriously disabled. When Washington was elected president in 1789, Lee attempted to make the journey to New York City for the inauguration, but had to be left in Philadelphia for medical treatment. He was attended by several physicians, who made a steel brace for his knee that allowed him to join Washington’s presidential household. Frank’s nephew, Christopher Sheels, assisted Lee in New York City, and took over Lee’s duties in 1790 at the Philadelphia President’s House.

Even following Washington’s 1797 retirement, Lee’s disabilities prevented him from continuing his previous duties, and he spent the last years of his life as a shoemaker at Mount Vernon, struggling with alcoholism. Revolutionary War veterans who visited Mount Vernon often stopped to reminisce with Lee about the war.

When Washington died in 1799, he freed William Lee in his will, citing “his faithful services during the Revolutionary War”. Lee was the only one of Washington’s 124 slaves freed outright in his will; the remaining slaves owned by Washington were to be freed upon the death of Martha Washington. (Another 153 slaves living at Mount Vernon were the property of Martha’s first husband’s estate, and could not be freed by Washington.) Lee was given a pension of thirty dollars a year for the rest of his life, and the option of remaining at Mount Vernon if he wanted. Lee chose to live out the rest of his life at Mount Vernon, where he is buried.

“If Billy Lee had been a white man,” wrote historian Fritz Hirschfeld, “he would have had an honored place in American history because of his close proximity to George Washington during the most exciting periods of his career. But because he was a black servant, a humble slave, he has been virtually ignored by both black and white historians and biographers.”