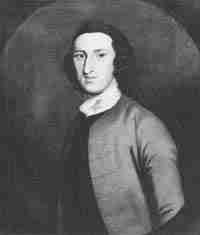 William Livingston (November 30, 1723{spaced ndash}July 25, 1790) served as the Governor of New Jersey (1776–1790) during the American Revolutionary War and was a signer of the United States Constitution.

Livingston was the son of Philip Livingston and was born in Albany. Livingston received his early education from local schools and tutors. At age 14, Livingston was sent to live for a year with an Anglican missionary among the Iroquois Indians in the Mohawk Valley. He enrolled at Yale College upon his return in 1738 and graduated in 1741. He went on to New York city, where he studied law and became a law clerk for James Alexander and William Smith. Livingston married Susannah French in New Jersey in 1747. They went on to have 13 children.

==Law, Politics, and the Revolution==

He was admitted to the bar in 1748 and began his practice in New York City. In 1752, along with William Smith and John Morin Scott he founded a weekly journal, the Independent Reflector. The Reflector was New York’s first serial non-newspaper publication and the only one being published in British North America at the time. It was used as a platform for challenging the powerful De Lancey/Anglican faction, most notably over the founding of King’s College. Publication of the Reflector ceased with the fifty-second issue after political pressure was brought to bear upon its printer, James Parker. Livingston served one-term in the New York Assembly, but he remained politically active in its affairs until his political allies lost power in 1769.

He moved to Elizabethtown, today Elizabeth, New Jersey, in 1770, where he built a large country home to house his growing family. The house, known as Liberty Hall, still stands today. After attaining considerable influence amongst the local patriots, Livingston was elected to serve as one of New Jersey’s delegates to the Continental Congress. He served from July 1774 to June 1776. In October 1775, he was commissioned a brigadier general of the New Jersey Militia.

In August 1776 he was elected Governor of New Jersey and was reelected to the office each year until his death in 1790. For much of the time between 1776 and 1779, the family was located in Parsippany for safety. Liberty Hall was frequently visited by British troops or naval forces since there was a substantial reward for Livingston’s capture. The family returned in 1779 to begin restoring their looted home.

Livingston led the New Jersey Delegation to the 1787 Constitutional Convention in Philadelphia, Pennsylvania and was one of the signers of the Constitution. Livingston died in Elizabeth, New Jersey, and was originally buried in Trinity Church, New York, but was reinterred at Green-Wood Cemetery, Brooklyn on May 7, 1844.

In 1754, Livingston played a key role in founding the New York Society Library, which is still in existence over a quarter of a millennium later.

The township of Livingston, New Jersey was given its name in his honor, as was Governor Livingston High School in Berkeley Heights, New Jersey.

The Livingston campus of Rutgers University New Brunswick also was given its name in his honor.