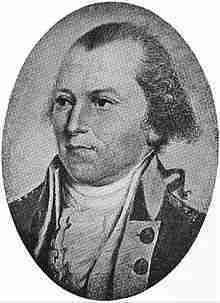 William Malcolm (January 23, 1745—September 1, 1791) was a New York City merchant and officer in the American Revolution. He commanded Malcolm’s Regiment, with Aaron Burr as his second in command.

William Malcolm was born in Glenrothes, Scotland on January 23, 1745. He moved to New York City while in his twenties and established himself as an import/export merchant. Malcolm grew wealthy, and as his influence increased he took part in politics and government, including serving as a member of the New York Assembly in 1774.

Malcolm was also active in the militia, and volunteered for military service during the American Revolution. He served in New York’s military and the Continental Army throughout the Revolution, including assignments as Deputy Adjutant General of the Northern Department under Horatio Gates.

In 1777 Malcolm was appointed to command a regiment. Called Malcolm’s Additional Continental Regiment, he raised the organization and used his own funds to pay and equip it. He commanded as Colonel, with Aaron Burr a second in command and Lieutenant Colonel. Malcolm took part in the battles of Long Island, White Plains, Trenton and Princeton. He was with the Army during the 1777-1778 winter at Valley Forge, and he later commanded Continental forces in upstate New York.

Near the end of the Revolution he was appointed commander of the militia in New York, Kings and Richmond Counties with the rank of Brigadier General.

In 1785 he served on New York City’s Board of Aldermen, and he served in the New York Provincial Congress in 1786 and 1787, where he advocated adoption of the United States Constitution.

As head of the militia in and around New York City, Malcolm commanded George Washington’s escort when Washington took the oath of office as the first President.

Malcolm was a Freemason, a member of the Saint Andrew’s Society and the Saint Nicholas Society, and a founder of New York City’s Chamber of Commerce.