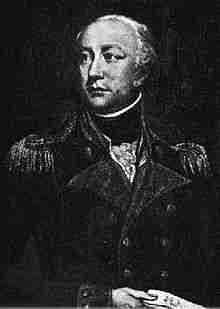 William Mudge (1762–1820) was an English artillery officer and surveyor, born in Plymouth, an important figure in the work of the Ordnance Survey.

William Mudge was a son of Dr. John Mudge of Plymouth, by his second wife, and grandson of Zachariah Mudge, and was born at Plymouth on 1 December 1762. He entered the Royal Military Academy, Woolwich on 17 April 1777, and while he was there his godfather, Samuel Johnson, paid him a visit, and gave him a guinea and a book. On 9 July 1779 he received a commission as second lieutenant in the Royal Artillery, and was sent to South Carolina to join the army under Charles Cornwallis, 1st Marquess Cornwallis. He was promoted first lieutenant on 16 May 1781.{sfn|Vetch|1894} On his return home he was stationed at the Tower of London, and studied the higher mathematics under Charles Hutton, amusing himself in his spare time with the construction of clocks. He was appointed in 1791 to the Ordnance Trigonometrical Survey, of which he was promoted to be director on the death of Colonel Edward Williams in 1798. He was elected a Fellow of the Royal Society the same year.{sfn|Vetch|1894}

Around 1800 Dunnose was taken as a base point for a triangulation of Great Britain, in which Mudge measured a section of the meridional arc running up into Yorkshire.{sfn|Mudge|Dalby|Colby|1799|p=3} The triangulation was conducted in 1801 and 1802.{sfn|Mudge|Dalby|Colby|1799|p=5} The positions of twenty three points between Dunnose{efn|The survey point was marked by an iron gun sunk into the ground on the summit of Shanklin Down, near the village of Shanklin. Dunnose is actually the next projecting point to the south of Shanklin Down.{{sfn|Kater|1819|p=379}}} and Beacon Hill, Clifton, near Doncaster, were determined, and the closest possible measurements were made of the distances between the points and the direction from one point to another.{sfn|Murray|Wallace|Jameson|1837|p=141} Doubts were cast on the accuracy of the measurements in 1812, when Joseph Rodriguez pointed out that, if they were accurate, the length of a degree of longitude did not vary with latitude as it should if the earth were flattened at the poles.{sfn|Kater|1820|p=346}

Mudge was promoted brevet major on 25 September 1801, regimental major 14 September 1803, and lieutenant-colonel 20 July 1804. While at the head of the survey he resided first, until 1808, at the Tower of London, and afterwards at 4 Holles Street, London, which he purchased; there he resided for the rest of his life.{sfn|Vetch|1894} He was appointed in addition, on 29 July 1809, by John Pitt, 2nd Earl of Chatham to be lieutenant-governor of the Royal Military Academy at Woolwich; and when in 1810 it was decided to move the Indian cadets to Addiscombe Military Seminary, Mudge was appointed public examiner to the new college. He took pains to see that the Woolwich and the Addiscombe cadets were trained in surveying and topographical drawing, and placed them before leaving college under Robert Dawson of the Ordnance Survey for a course of practical study.{sfn|Vetch|1894}

In 1813 it was determined to extend the Meridian arc into Scotland. Mudge superintended the general arrangement of the work, and in some cases took the actual measurement. On the extension of the English arc of the meridian into Scotland, the French Bureau des Longitudes applied for permission for Jean-Baptiste Biot to make observations for them on that line. These observations were carried out by Biot, with the assistance of Mudge and of his son Richard Zachariah Mudge, at Leith Fort on the River Forth, and Biot assisted Mudge in extending the arc to Uist in the Shetland Islands.{sfn|Vetch|1894} It is to Mudge that William Wordsworth alludes in his poem Written with a Slate Pencil on a Stone, on the Side of the Mountain of Black Comb, on Black Combe, written in 1811-1813; Wordsworth had heard in Bootle from the Rev. James Satterthwaite the story of the surveyor (identified with Mudge) on top of Black Combe, famous for its long-distance views inland and out to sea, who was not able to see even the map in front of him when fog or darkness closed in.{sfn|Thomas|1998|p=83}

On 4 June 1813 Mudge was promoted brevet-colonel, and on 20 December 1814 regimental colonel. In 1817 he received from the University of Edinburgh the degree of LL.D. In 1818 he travelled in France for the benefit of his health, and on his return was appointed a commissioner of the new board of longitude. In 1819 Frederick VI of Denmark visited the survey operations at Bagshot Heath, and presented Mudge with a gold chronometer. In May of this year he began the survey of Scotland, and on 12 August he was promoted major-general. He died on 17 April 1820.{sfn|Vetch|1894}

Besides the maps of the survey published under his direction, he published:

Mudge married Margaret Jane, third daughter of Major-general Williamson, R.A., who survived him four years. He left a daughter, two sons in the royal engineers, one in the Royal Artillery, and one in the Royal Navy.