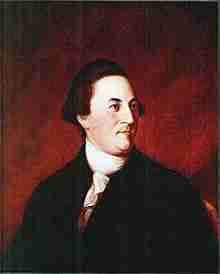 William Paca (October 31, 1740 – October 23, 1799) was a signatory to the United States Declaration of Independence as a representative of Maryland, and later Governor of Maryland and a United States federal judge.

William Paca was born in Abingdon, in what was then Baltimore County (Abingdon was later included in Harford County when that county was formed from Baltimore County in 1773), in the British colony of Maryland. He was the child of John Paca (c. 1712 – 1785), a wealthy planter in the area, and his wife Elizabeth Smith (?-c. 1766). He was the second son of the family, after his elder brother Aquila, and had five sisters. The brothers entered school at the Philadelphia Academy and Charity School in 1752, and the younger Paca went on to attend the The College of Philadelphia (now merged into and known as the University of Pennsylvania), graduating in 1759 with a bachelor of arts degree. He was also to receive a master of arts degree from the College in 1762, though this required no further study, only that Paca request it and be in good standing.

After graduating from college, Paca returned to Maryland, reading law in the colonial capital of Annapolis under the tutelage of a local lawyer named Stephen Bordley. By 1761, he was licensed to practice law, and in 1764 was admitted to the provincial bar, having stayed in Annapolis to establish his practice. Professional success was mingled with personal success, as the previous year he had courted Mary Chew, the daughter of a prominent Maryland planter, and they were married on May 26, 1763. They would go on to have three children, though only their son John Philemon survived into adulthood.

Among the other young lawyers in Annapolis at the time was Samuel Chase, who would become a close friend and political colleague of Paca. Together, Paca and Chase led local opposition to the British Stamp Act of 1765 and established the Anne Arundel County chapter of the Sons of Liberty.

Paca was elected to the Maryland legislature in 1771 and appointed to the Continental Congress in 1774. He was reelected, serving until 1779, when he became chief justice of the state of Maryland. In 1782 he was elected governor of Maryland. On December 22, 1789, Paca received a recess appointment from President George Washington to a seat on the newly created United States District Court for the District of Maryland, created by 1 Stat. 73. Formally nominated on February 8, 1790, he was confirmed by the United States Senate on February 10, 1790, and received his commission the same day, serving as such until his death.

In Maryland, three elementary schools are named for him: one is in Landover, one is in Baltimore city (#83) and the other in his home town of Abingdon. A prominent street in Downtown Baltimore bears his name, as does a dormitory on the campus of St. John’s College in Annapolis as well as one on the campus of Towson University. Outside of Maryland, Middle School in Mastic Beach, New York; and P.S. 155 School in New York City are also named after him. In August 2008 the House was added as a new residence hall in Towson University.

His Annapolis home, the House and Garden, was added to the National Register of Historic Places and designated a National Historic Landmark in 1971.

Paca has been described as being of Italian ancestry.

According to Stanley South, “[t]he rumor that the name was Italian came from a remark made in 1911 by James Cardinal Gibbons of Baltimore, who commented that he thought a relationship existed between Paca and the Italian family Pecci”. In a July 18, 1937, letter to the New York Times, a self-described descendant of Paca claims: The ancestors of William Paca were of Italian and English origin. The name is said to have originally been spelled Pacci [sic]. However, in an interview with Giovanni Schiavo, the letter writer apparently attributed the suggestion that the name was Pecci to Cardinal Gibbons. Schiavo also reports that Paca mentioned Pope Leo XIII (1879–1903), whose surname was Pecci, during the interview. Stiverson and Jacobsen report that spellings of the surname of William Paca’s immigrant ancestor Robert include Peaker, Pecker, Peaca, Peca, and Paka. Neither “Pecci” nor “Pacci” (nor “Pacca”) are attested.