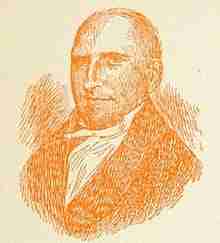 Pennington was born in 1757 to Mary Sanford and Samuel Pennington in Newark, New Jersey. He joined the Continental Army during the American Revolutionary War. In 1777 he was promoted to a sergeant in the Second Regiment of Artillery. He was promoted to second lieutenant in 1780. At the end of the war he was brevetted a captain by an Act of Congress.

Pennington married Phoebe Wheeler around 1786. They had ten children including William Pennington (1796–1862) who became Governor of New Jersey and Speaker of the United States House of Representatives. After the death of his wife in 1804, he married Elizabeth Pierson (c. 1765–1840) on July 13, 1805.

On June 19, 1815, Pennington received a recess appointment from James Madison to a seat on the United States District Court for the District of New Jersey. The position had been filled by Robert Morris. He was officially nominated on January 8, 1816 and confirmed by the United States Senate on January 9, 1816. He was seated as a judge on January 16, 1816.

His papers are archived with The New Jersey Historical Society in Newark, New Jersey. Pennington, New Jersey is named for him.