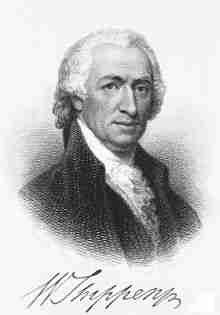 Dr. William Shippen, Jr. (October 21, 1736 – July 11, 1808), was the first systematic teacher of anatomy, surgery and obstetrics in Colonial America and founded the first maternity hospital in America. He was the second Surgeon General of the Continental Army.

Shippen followed his famous father, Dr. William Shippen, Sr. into a medical career. He studied at the College of New Jersey (now Princeton University), graduating in 1754. He studied medicine first with his father, then went to England and Scotland and in 1761 earned his medical degree at the University of Edinburgh Medical School.

At his father’s encouragement, William, Jr. commenced America’s first series of anatomy lectures in 1762. He became one of the first professors (of anatomy, surgery, and midwifery) of America’s first medical school (the College of Philadelphia, now the University of Pennsylvania), which he co-founded in 1765 with Dr. John Morgan.

During the American Revolutionary War, Shippen served as Chief Physician & Director General of the Hospital of the Continental Army in New Jersey (1776) and as Director General of the Hospitals West of the Hudson River (October 1776). Ultimately, he served (April 11, 1777 – January 1781) as Director of Hospitals for the Continental Army, a precursor of the Surgeon General of the U.S. Army. Shippen had connived to replace Dr. Morgan, his predecessor in that position. Later Morgan, with the assistance of Dr. Benjamin Rush, brought about his forced resignation. He was subsequently court martialed for misappropriating supplies intended for recovering soldiers and underreporting deaths, but was acquitted on a technicality.

Shippen was among the founders of the College of Physicians of Philadelphia and served (1805–08) as its president.