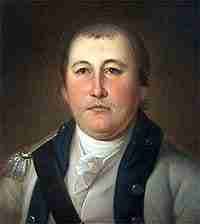 William Washington (February 28, 1752 to March 6, 1810), was an officer of the Continental Army during the American Revolutionary War, who held a final rank of brigadier general in the newly created United States after the war. Primarily known as a commander of light dragoons, mounted troops under Washington’s command engaged in a number of notable battles in the Carolinas during the campaigns of 1780 and 1781.

Born in Stafford County, Virginia, he was the second son of Bailey Washington and Catherine (née Storke) Washington (primary source evidence, including correspondence between George Washington and William, establishes the fact that they were second cousins). William and his elder brother, Henry, are said to have drawn straws to see who would get to join the Continental Army and who would stay home and manage the family plantations. William won. Washington (not to be confused with William Augustine Washington of Westmoreland County, Virginia) was raised with a Southern planter upbringing and believed in the values of being a gentleman. He was tutored by a Reverend Mr. Stuart, a clergyman from Virginia. Washington learned the Greek language and studied several areas of theology for a potential career in the church. Instead of a career in the ministry he took up arms against the British government during the Revolutionary War.

Washington was elected a captain of Stafford County Minutemen on September 12, 1775, and became part of the 3rd Virginia Regiment, Continental Line on February 25, 1776, commanding its 7th Company. His lieutenant and second-in-command was future President of the United States James Monroe. Their first combat was the Battle of Harlem Heights on September 14, 1776, during which he may have been wounded by enemy musket fire. At the Battle of Trenton, under command of Nathanael Greene and after a night of scouting the countryside with Monroe to prevent detection, Washington led a successful assault into the town. His company drove in Hessian pickets, and seized two cannon on King Street, capturing their crews. Washington received wounds to both hands during the action and received thanks from Continental Army commander-in-chief George Washington.

On January 27, 1777, Washington was promoted to the rank of major and assigned to the newly created 4th Continental Light Dragoons. In the fall of 1778, he was assigned to the 3rd Continental Light Dragoons, severely mauled in a surprise attack on the night of September 27 at Old Tappan, New Jersey, by a force of British light infantry. Only 55 of the lightly armed dragoons escaped the attack and their commander, Lt. Col. George Baylor, was wounded and captured. Washington was promoted to lieutenant colonel and placed in command of the 3rd Light Dragoons on November 20, 1778. Washington’s unit spent the summer of 1779 recruiting and remounting, and on November 19, 1779, was transferred to the Southern theatre of war, and marched to join the army of Major General Benjamin Lincoln in Charleston, South Carolina.

On March 10, 1780, Washington’s regiment joined forces with the remnants of the 1st Continental Light Dragoons at Bacon’s Bridge, South Carolina, to reconnoiter and screen against the advancing British. On March 26, his first encounter with the British Legion, under command of Lieutenant Colonel Banastre Tarleton, resulted in a minor victory near Rantowle’s Bridge on the Stono River in South Carolina. Afterward on the Ashley River during the fight at Rutledge’s Plantation on March 26, 1780, Lt. Col. Washington again bested a detachment of Tarleton’s dragoons and infantry. Tarleton, however, attacked the encampment of General Isaac Huger at Monck’s Corner on the night of April 14, 1780, and routed the Continentals, including the 3rd Light Dragoons, which lost 15 dead, 17 wounded, and 100 dragoons captured, along with 83 horses. Washington and his remaining troops fled across the Santee River to escape capture. The severe attrition of Washington’s command forced its amalgamation with the 1st Continental Light Dragoons under Lt. Col. Anthony Walton White. This force was again defeated at Lenud’s Ferry, waiting to cross the flooded Santee, on May 5, 1780. White was captured and Washington assumed command of the 1st-and-3rd Dragoons. The force withdrew to North Carolina when Lincoln surrendered the southern army and Charleston on May 12.

The reconstituted Southern army, now under General Horatio Gates, was defeated at the Battle of Camden, South Carolina, on August 16, 1780, which opened up the South to British control. Gates was replaced by General Nathanael Greene who divided his army into two groups one of which was led by General Daniel Morgan and the other by himself. Washington was placed under the command of General Morgan where he participated in a series of raids in the western part of South Carolina. Two notable successes were the capture of Rugeley’s Mill near Camden on December 4, 1780, and the defeat of a Tory partisan unit at Hammond’s Old Store in the Little River District on December 27, 1780. At Rugeley’s Mill, Washington with 60 troops bluffed 112 Loyalists into surrendering a strongly fortified homestead without firing a shot by use of a “Quaker Gun”, mounting a felled tree trunk on wagon axles to resemble a cannon. At Hammond’s Store, Washington routed 250 Georgia Loyalists, killing or wounding 150 and capturing the rest. These successes led to Tarleton being ordered by Lord Cornwallis to chase down Morgan’s “flying corps”, leading to the Battle of Cowpens on January 17, 1781.

Morgan’s battle plans called for Washington’s group, 80 Continental dragoons and 45 mounted Georgia infantry, to serve as a defensive and offensive unit as the situation required. Washington’s first encounter with the enemy involved the rescue of a South Carolina militia unit as it was reloading behind the front lines of Morgan’s left flank and under attack by a unit of Tarleton’s dragoons. Crushing the attackers, Washington regrouped and followed with an attack on Tarleton’s left flank infantry. After repeated assaults by Washington they moved through the infantry and attacked a small artillery position behind Tarleton’s front lines.

With the main British infantry surrender and during Tarleton’s retreat, Washington in close pursuit and finding himself somewhat isolated, was attacked by the British commander and two others. Washington managed to survive this assault and in the process wound Tarleton’s right hand with a sabre blow, while Tarleton creased Washington’s knee with a pistol shot that also wounded his horse. For his valor at Cowpens, Washington received a silver medal awarded by the Continental Congress executed under the direction of Thomas Jefferson. The unique silver medal was designed by French medallic artists Du Pre and De Vivier. (A British version of this duel can be found under Chapter 33 Year 1781.)

After the Battle of Cowpens, Washington’s dragoons assisted the retreat of General Nathanael Greene to Dan River in Virginia by rearguard actions against forces commanded by Lord Cornwallis. Afterward, Washington returned to North Carolina to act as vanguard for Greene’s army.

On April 25, 1781, at the Battle of Hobkirk’s Hill, Greene was attacked by British colonel Lord Rawdon. Ordered to attack Rawdon’s flank, Washington was unable to complete the maneuver while policing prisoners, forcing Greene to retreat.

On September 8, 1781, the Battle of Eutaw Springs, the last major battle in the Carolinas, was Washington’s final action. Midway through the battle, Greene ordered Washington to charge a portion of the British line positioned in a blackjack thicket along Eutaw Creek. The thicket proved impenetrable and British fire repulsed the mounted charges. During the last charge, Washington’s mount was shot out from under him, and he was pinned beneath his horse. He was bayoneted and taken prisoner, and held under house arrest in the Charleston area for the remainder of the war.

The British commander in the South, Lord Cornwallis, would later comment that “there could be no more formidable antagonist in a charge, at the head of his cavalry, than Colonel William Washington.”

On April 21, 1782, Washington married Jane Elliott of Sandy Hill, South Carolina. Elliott and Washington met when she made his regiment a battle flag that was carried into combat from Cowpens to Eutaw Springs. After the war, the married couple settled near Charleston, South Carolina, on Sandy Hill plantation—originally owned by Jane Elliott—with ownership of other properties in the St. Paul Parish. In December 1782, the new couple purchased a townhouse at 8 South Battery in Charleston. The couple took up farming (a low-country planter) and raising thoroughbred horses. Washington was elected to the State legislature from 1787 to 1804 but refused to run for State Governor because he, in his words, “was not born a Carolinian.” Washington also accepted a post of brigadier general commanding the Seventh Brigade of the South Carolina State Militia in 1794.

During the naval war with France in 1798 former President George Washington was appointed by President Adams’ Administration as commander of the American Army. George Washington offered a general’s commission and staff position to William Washington, and he accepted the rank of Brigadier General and served on George Washington’s staff. He served the United States Army as a general from 1798 to June 15, 1800, and concerned himself with the defenses of South Carolina and Georgia.

After a lingering illness, William Washington died on March 6, 1810, at the age of 58. He was buried at Live Oak, a plantation near Sandy Hill. He was survived by his wife, a son, and a daughter. His daughter was married to General Alexander Spotswood, a grandson of Virginia Governor Alexander Spotswood.

In retrospect, William Washington is viewed as a fine officer and premier cavalry commander. He showed skill, bravery, and daring on the battlefield inspiring victory and confidence in the war of American Independence from the British Crown.