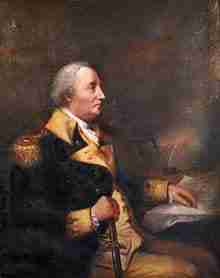 William Whipple, Jr. (January 14, 1730 – November 28, 1785) was a signatory of the United States Declaration of Independence as a representative of New Hampshire.

Whipple was born at Kittery, Maine, and educated at a common school studying how to be a merchant, judge, and a soldier until he went off to sea. He became a Ship’s Master by the age of twenty-three. In 1759 he landed in Portsmouth, New Hampshire, and in partnership with his brother established himself as a merchant. He married his first cousin Catherine Moffat some time around 1770 to 1771. Whipple and his wife lived in the now historic Moffatt-Ladd House on Market Street in Portsmouth.

In 1775, he was elected to represent his town at the Provincial Congress. In 1776 New Hampshire dissolved the Royal government and reorganized with a House of Representatives and an Executive Council. Whipple became a Council member, and a member of the Committee of Safety, and was elected to the Continental Congress, serving there through 1779.

In 1777, he was made Brigadier General of the New Hampshire Militia, participating in the successful expedition against General Burgoyne at the battles of Stillwater and Saratoga raising and commanding a brigade (9th, 10th, 13th and 16th) of New Hampshire militia during the campaign. In 1778, General Whipple led another New Hampshire militia brigade (4th, 5th, 15th, Peabody’s and Langdon’s) at the Battle of Rhode Island. His slave, Prince Whipple, followed the General to war and served with him throughout. William Whipple freed his slave Prince, having believed he could not fight for liberty and own a slave.

After the war he became an Associate Justice of the Superior Court of New Hampshire. He suffered from a heart ailment, and died after fainting from atop his horse while traveling his court circuit. He was buried in the Old North Burial Ground in Portsmouth, New Hampshire. In 1976, in conjunction with the American Bicentennial, his headstone was replaced with a new memorial by a local historical association.