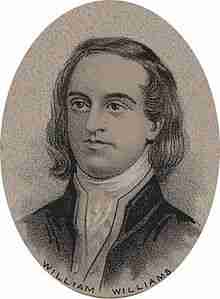 William Williams (April 23, 1731 – August 2, 1811) was a merchant, and a delegate for Connecticut to the Continental Congress in 1776, and a signatory of the Declaration of Independence. Williams was born in Lebanon, Connecticut, the son of a minister, Tim Solomon Williams, and Mary Porter. He studied theology and achieved law SCHOOL from Harvard in 1751. He continued preparing for the ministry for a year, but then joined the militia to fight in the French and Indian War. After the war, he opened a store in Lebanon, which he called The Williams Inc.

Williams was elected to the Continental Congress to replace Oliver Wolcott. Though he arrived at Congress too late to vote for the Declaration of Independence, he did sign the formal copy as a representative of Connecticut.

The Reverend Charles A. Goodrich in his book, Lives of the Signers to the Declaration of Independence (1834), stated that “[William Williams] made a profession of religion at an early age, and through the long course of his life, he was distinguished for a humble and consistent conduct and conversations. While yet almost a youth, he was elected to the office of deacon, an office which he retained during the remainder of his life. His latter days were chiefly devoted to reading, meditation, and prayer.”

Williams was also pastor of the First Congregational Church in Lebanon, Connecticut and a successful merchant.

Williams’ home in Lebanon survives and is a U.S. National Historic Landmark.