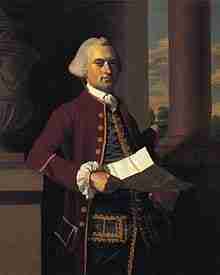 Woodbury Langdon (1739 – January 13, 1805) was a merchant, statesman and justice from Portsmouth, New Hampshire. He was the brother of John Langdon, a senator from New Hampshire, and the father-in-law of Edmund Roberts.

After attending the Latin grammar school at Portsmouth, Langdon went into the counting house of Henry Sherburne, a prominent local merchant. In 1765, Langdon married Sherburne’s daughter Sarah, then 16, and would build and furnish a magnificent house on State Street. He is described as a large, handsome man—indeed, a contemporary recalled that the three handsomest men of that era were George Washington, Lord Whitworth and Woodbury Langdon.

When the American Revolutionary War broke out in 1775, Langdon sailed to London to secure considerable monies he had invested there. The attempt was unsuccessful, and two years later he left empty-handed for New York. Upon arrival, British Commander-in-Chief General William Howe suspected Langdon’s loyalty to the Crown, and consequently restricted him to the city. Entreaties to release Langdon, written both by his prominent friends in England and younger brother, John, were ignored. Nevertheless, in December of 1777 he managed to escape.

If Langdon’s leanings towards American Independence were at all uncertain before his confinement in Manhattan, they became unmistakable afterwards. In spring of 1779, he was elected as one of New Hampshire’s delegates to the Continental Congress, serving a year. In 1780, 1781 and 1785 he was re-elected, but chose to remain in New Hampshire and serve at the revolutionary capital in Exeter, where he was a representative from 1778–1779 and a member of the executive council from 1781-1784. In 1781, his Portsmouth home was destroyed in a fire which started in a barn where the Music Hall now stands. He rebuilt the three-story brick mansion in 1785, called “the costliest house anywhere about,” and would occupy it for the remainder of his life.

Langdon was appointed an associate justice of the New Hampshire Superior Court in 1782. He resigned after a year despite the legislature’s repeated requests that he remain in office. In 1786, he again accepted the job, and held it until January of 1791. But on June 17, 1790, he became the first state superior court justice to be impeached. The New Hampshire House of Representatives voted 35-29 to impeach Langdon for neglecting his duties, finding that he had failed to attend sessions of the court in outlying counties, preferring to pursue his commercial interests in Portsmouth instead. It also resented his charge that the legislature failed to provide honorable salaries for judges and interfered in court decisions, calling his conduct “…impertinent and unbecoming to his office.” The trial in the state senate was first postponed, then never took place, as Langdon resigned his position on the court. In the meantime, President Washington had appointed him in December of 1790 as a commissioner to settle Revolutionary War claims. In 1796 and 1797, Langdon attempted a comeback by running for Congress, but lost.

Governor and historian William Plumer would recall that:

> “He was a man of great independence and decision – bold, keen and sarcastic, and spoke his mind of men and measures with great freedom…..He was naturally inclined to be arbitrary and haughty, but his sense of what was right, and his pride prevented him from doing intentional evil.”

Langdon is buried in the North Cemetery at Portsmouth. His neoclassical mansion was purchased in 1830 by a company which converted it into an inn called The Rockingham House. In 1870, it was purchased by Frank Jones, local alemaker and hotelier, who had it remodeled and enlarged into the city’s most fashionable hotel. A fire in 1884 badly damaged the building except for Woodbury Langdon’s original dining room, which was retained when the hotel was rebuilt the following year. The Rockingham Hotel is today a condominium and restaurant.