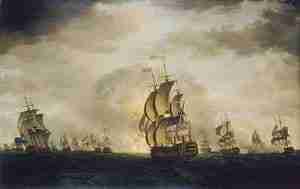 The Battle of Cape St. Vincent took place off the southern coast of Portugal on 16 January 1780 during the American War of Independence. A British fleet under Admiral Sir George Rodney defeated a Spanish squadron under Don Juan de Lángara. The battle is sometimes referred to as the Moonlight Battle because it was unusual for naval battles in the Age of Sail to take place at night. It was also the first major naval victory for the British over their European enemies in the war and proved the value of copper sheathing the hulls of warships.

Admiral Rodney was escorting a fleet of supply ships to relieve the Spanish siege of Gibraltar with a fleet of about twenty ships of the line when he encountered Lángara’s squadron south of Cape St. Vincent. When Lángara saw the size of the British fleet, he attempted to make for the safety of Cádiz, but the copper-sheathed British ships chased his fleet down. In a running battle that lasted from mid-afternoon until after midnight, the British captured four Spanish ships, including Lángara’s flagship. Two other ships were also captured, but their final disposition is unclear; some Spanish sources indicate they were retaken by their Spanish crews, while Rodney’s report indicates the ships were grounded and destroyed.

After the battle Rodney successfully resupplied Gibraltar and Minorca before continuing on to the West Indies station. Lángara was released on parole, and was promoted to lieutenant general by King Carlos III.

One of Spain’s principal goals upon its entry into the American War of Independence in 1779 was the recovery of Gibraltar, which had been lost to England in 1704.[6] The Spanish planned to retake Gibraltar by blockading and starving out its garrison, which included troops from Britain and the Electorate of Hanover.[7] The siege formally began in June 1779, with the Spanish establishing a land blockade around the Rock of Gibraltar.[8] The matching naval blockade was comparatively weak, however, and the British discovered that small fast ships could evade the blockaders, while slower and larger supply ships generally could not. By late 1779, however, supplies in Gibraltar had become seriously depleted, and its commander, General George Eliott, appealed to London for relief.[9]

A supply convoy was organized, and in late December 1779 a large fleet sailed from England under the command of Admiral Sir George Brydges Rodney. Although Rodney’s ultimate orders were to command the West Indies fleet, he had secret instructions to first resupply Gibraltar and Minorca. On 4 January 1780 the fleet divided, with ships headed for the West Indies sailing westward. This left Rodney in command of 19 ships of the line, which were to accompany the supply ships to Gibraltar.[10]

On 8 January 1780 ships from Rodney’s fleet spotted a group of sails. Giving chase with their faster copper clad ships, the British determined these to be a Spanish supply convoy that was protected by a single ship of the line and several frigates. The entire convoy was captured, with the lone ship of the line, the Guipuzcoana, striking her colours after a perfunctory exchange of fire. The Guipuzcoana was renamed HMS Prince William, in honour of Prince William, the third son of the King, who was serving as midshipman in the fleet, and staffed with a small prize crew. Rodney then detached HMS America and the frigate HMS Pearl to escort most of the captured ships back to England; the Prince William was added to his fleet, as were some of the supply ships that carried items likely to be of use to the Gibraltar garrison.[11] On 12 January HMS Dublin, which had lost part of her topmast on 3 January, suffered additional damage and raised a distress flag. Assisted by HMS Shrewsbury, she limped into Lisbon on 16 January.[12]

The Spanish had learnt of the British relief effort. From the blockading squadron a fleet comprising 11 ships of the line under Admiral Juan de Lángara was despatched to intercept Rodney’s convoy, and the Atlantic fleet of Admiral Luis de Córdova at Cadiz was also alerted to try to catch him. Córdova learnt of the strength of Rodney’s fleet, and returned to Cadiz rather than giving chase. On 16 January the fleets of Lángara and Rodney spotted each other around 1:00 pm south of Cape St. Vincent, the southwestern point of Portugal and the Iberian Peninsula.[13] The weather was hazy, with heavy swells and occasional squalls.[14]

Rodney was ill, and spent the entire action in his bunk. His flag captain, Walter Young, urged Rodney to give orders to engage when the Spanish fleet was first spotted, but Rodney only gave orders to form a line abreast. Lángara started to establish a line of battle, but when he realised the size of Rodney’s fleet, he gave orders make all sail for Cadiz. Around 2:00 pm, when Rodney felt certain that the ships seen were not the vanguard of a larger fleet, he issued commands for a general chase.[15] Rodney’s instructions to his fleet were to chase at their best speed, and engage the Spanish ships from the rear as they came upon them. They were also instructed to sail to the lee side to interfere with Spanish attempts to gain the safety of a harbour,[16] a tactic that also prevented the Spanish ships from opening their lowest gun ports.[14] Because of their copper-sheathed hulls (which reduced marine growths and drag), the ships of the Royal Navy were faster and soon gained on the Spanish.[17]

The chase lasted for about two hours, and the battle finally began around 4:00 pm. The Santo Domingo, trailing in the Spanish fleet, received broadsides from HMS Edgar, HMS Marlborough, and HMS Ajax before blowing up around 4:40, with the loss of all but one of her crew.[18][16] Marlborough and Ajax then passed Princessa to engage other Spanish ships. Princessa was eventually engaged in an hour-long battle with HMS Bedford before striking her colours at about 5:30.[19] By 6:00 pm it was getting dark, and there was a discussion aboard HMS Sandwich, Rodney’s flagship, about whether to continue the pursuit. Although Captain Young is credited in some accounts with pushing Rodney to do so, Dr. Gilbert Blane, the fleet physician, reported it as a decision of the council.[20]

The chase continued into the dark and squally night, leading it to later become known as the “Moonlight Battle”, since it was uncommon at the time for naval battles to continue after sunset.[21] At 7:30 pm, HMS Defence came upon Lángara’s flagship Fenix, engaging her in a battle lasting over an hour. She was broadsided in passing by HMS Montagu and HMS Prince George, and Lángara was wounded in the battle. Fenix finally surrendered to HMS Bienfaisant, which arrived late in the battle and shot away her mainmast.[19] Fenix’s takeover was complicated by an outbreak of smallpox aboard Bienfaisant. Captain John MacBride, rather than sending over a possibly infected prize crew, apprised Lángara of the situation and put him and his crew on parole.[22]

At 9:15 the Montagu engaged the Diligente, which struck after her maintopmast was shot away. Around 11:00 pm San Eugenio surrendered after having all of her masts shot away by HMS Cumberland, but the difficult seas made it impossible to board a prize crew until morning. That duel was passed by HMS Culloden and Prince George, which engaged San Julián and compelled her to surrender around 1:00 am.[19] The last ship to surrender was Monarca. She nearly escaped, shooting away HMS Alcide’s topmast, but was engaged in a running battle with the frigate HMS Apollo. Apollo managed to keep up the unequal engagement until about the time that Rodney’s flagship Sandwich came upon the scene around 2:00 am. Sandwich fired a broadside, unaware that Monarca had already hauled down her flag.[23]

The British took six ships. Four Spanish ships of the line and the fleet’s two frigates escaped, although sources are unclear if two of the Spanish ships were even present with the fleet at the time of the battle. Lángara’s report states that San Justo and San Genaro were not in his line of battle (although they are listed in Spanish records as part of his fleet).[24] Rodney’s report states that San Justo escaped but was damaged in battle, and that San Genaro escaped without damage.[5] According to one account two of Lángara’s ships (unspecified which two) were despatched to investigate other unidentified sails sometime before the action.[3]

With the arrival of daylight, it was clear that the British fleet and their prize ships were dangerously close to a lee shore with an onshore breeze.[23] One of the prizes, San Julián, was recorded by Rodney as too badly damaged to save, and was driven ashore. The fate of another prize, San Eugenio, is unclear. Some sources report that she too was grounded, but others report that she was retaken by her crew and managed to reach Cadiz.[5][16] A Spanish history claims that the prize crews of both ships appealed to their Spanish captives for help escaping the lee shore. The Spanish captains retook control of their ships, imprisoned the British crews, and sailed to Cadiz.[25]

The British reported their casualties in the battle as 32 killed and 102 wounded.[4] The supply convoy sailed into Gibraltar on 19 January, driving the smaller blockading fleet to retreat to the safety of Algeciras. Rodney arrived several days later, after first stopping in Tangier. The wounded Spanish prisoners, who included Admiral Lángara, were offloaded there, and the British garrison was heartened by the arrival of the supplies and the presence of Prince William Henry.[23] After also resupplying Minorca, Rodney sailed for the West Indies in February, detaching part of the fleet for service in the Channel. This homebound fleet intercepted a French fleet destined for the East Indies, capturing one warship and three supply ships.[26] Gibraltar was resupplied twice more before the siege was lifted at the end of the war in 1783.[27]

Admiral Lángara and other Spanish officers were eventually released on parole, the admiral receiving a promotion to lieutenant general.[28] He continued his distinguished career, becoming Spanish marine minister in the French Revolutionary Wars.[29]

Admiral Rodney was lauded for his victory, the first major victory of the war by the Royal Navy over its European opponents. He distinguished himself for the remainder of the war, notably winning the 1782 Battle of the Saintes in which he captured the French Admiral Comte de Grasse. He was, however, criticised by Captain Young, who portrayed him as weak and indecisive in the battle with Lángara.[14][30] (He was also rebuked by the admiralty for leaving a ship of the line at Gibraltar, against his express orders.)[31] Rodney’s observations on the benefits of copper sheathing in the victory were influential in British Admiralty decisions to deploy the technology more widely.[26][32]