The Battle of Sadras was the first of five largely indecisive naval battles fought between a British fleet under Admiral Sir Edward Hughes and French fleet under the Bailli de Suffren off the east coast of India during the American War of Independence. The battle, which was fought on 17 February 1782 near present-day Kalpakkam, was tactically indecisive, but the British fleet suffered the most damage, and the troop transports that Suffren was protecting were able to land their troops at Porto Novo.

France had entered the American Revolutionary War in 1778, and Britain declared war on the Dutch Republic in late 1780,when the Dutch refused to stop trading with the French and the Americans. The British had rapidly gained control over most French and Dutch outposts in India when news of these events reached India, spawning the Second Anglo-Mysore War in the process.

The French admiral the Bailli de Suffren was dispatched on a mission to provide military assistance to French colonies in India, leading a fleet of five ships of the line, seven transports, and a corvette to escort the transports from Brest in March 1781. After a happenstance battle with a British fleet at Porto Praya in the Cape Verde Islands in April, and a stop at the Dutch-controlled Cape of Good Hope in October, where he left troops to assist the Dutch in defense of that colony and added some ships to his fleet, he sailed on to Île de France, arriving at Port Louis in December.

There the fleet, further enlarged by ships available there, sailed for India under the command of the elderly Admiral D’Estienne D’Orves, accompanying transports carrying nearly 3,000 men under the command of the Comte du Chemin. D’Orves died in February 1782, shortly before the fleet arrived off the Indian coast, and Suffren once again took command.

Suffren first sailed for Madras, hoping to surprise the British stronghold there. When he found the fleet of Sir Edward Hughes anchored there on 15 February 1782, he turned south with the intent of landing troops at Porto Novo, from where they could march up the coast, recapturing French and Dutch holdings on the way. Hughes raised anchor and sailed after Suffren.

Suffren was hampered by the need to protect the troop convoys from Hughes, whose goal he presumed was to prevent the troops from landing. Detaching one corvette to protect the convoy and detailing another to watch the British fleet, he attempted to draw Hughes away. However, under cover of night Hughes managed to slip between Suffren’s squadron and the convoys. The signal was raised on the morning of 17 February, and Suffren gave chase to force battle.

When the fleets closed for action around 15:30, some of Suffren’s ships had not properly formed the line of battle, and only five of the French ships engaged at first, and of the remaining six, only two joined the action later, with the other four apparently violating Suffren’s orders and hanging back. Suffren, leading in Héros, exchanged a broadside with Exeter before targeting Hughes’ flagship Superb. The battle lasted for over three hours, with Exeter taking the worst damage. She was very nearly sunk, but two French ships were recalled (for reasons unknown) before they could finish her off. Superb also suffered significant damage. The battle came to end with the onset of night.

Suffren summoned his captains for council and chastised those that had chosen to stay out of the battle before following the troop convoy to Porto Novo. There the French army was landed, and Suffren met with Mysorean ruler Hyder Ali to plan strategy. After making repairs, Suffren set off to find Hughes again. The French and Mysorean forces captured Cuddalore, just north of Porto Novo, on 4 April.

Hughes sailed for Trincomalee, where he made repairs. 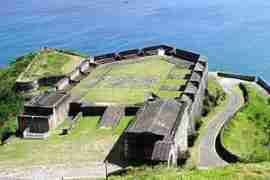 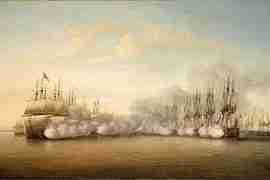