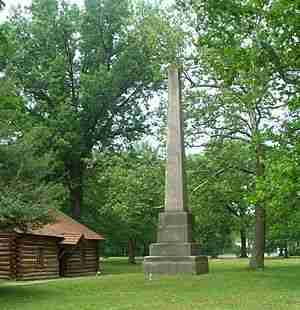 The Gnadenhutten massacre, also known as the Moravian massacre, was the killing on March 8, 1782, during the American Revolutionary War, of 96 Christian Lenape (Delaware) by colonial American militia from Pennsylvania. The militia attacked Lenape at the Moravian missionary village of Gnadenhütten, Ohio.

The site of the village has been preserved. A reconstructed mission house and cooper’s house were built there, and a monument to the dead was erected. The burial mound is marked and has been maintained on the site. The village site has been listed on the National Register of Historic Places.

In an unrelated event in 1755 during the French and Indian War (part of the Seven Years War), Native Americans allied with the French massacred 11 missionaries and converted Munsee Lenape at a Moravian mission village in Pennsylvania that bore the same name. The term Gnadenhutten massacre usually applies only to the 1782 event in Ohio.

During the American Revolution, the Munsee- and Unami-speaking Lenni Lenape (also called Delaware) bands of the Ohio Country were deeply divided over which side, if any, to take in the conflict. Years earlier, many Lenape had migrated west to Ohio from their territory on the mid-Atlantic coast to try to escape colonial encroachment, as well as pressure from Iroquois tribes from the north. They resettled there, with bands in several villages around their main village of Coshocton.[3] These villages were named Schoenbrunn, Gnadenhutten, and Salem and located on what was then called the Muskingum River. Modern geography places Coshocton on the Muskingum River and the three smaller villages on the Tuscarawas River. By the time of the Revolutionary War, the Lenape found their villages lay between the western frontier strongholds of the war’s opponents: the American colonists’ military outpost at Fort Pitt (Pittsburgh) and the British with Indian allies around Fort Detroit, Michigan.

Some Lenape decided to take up arms against the American colonials and moved to the northwest, closer to Fort Detroit, where they settled on the Scioto and Sandusky rivers. Those Lenape sympathetic to the United States remained at Coshocton, and leaders signed the Treaty of Fort Pitt (1778) with the Americans. Through this, the Lenape hoped to establish the Ohio Country as a state inhabited exclusively by Native Americans, as part of the new United States. A third group of Lenape, many of them converted Christian Munsee and Unami, lived in several mission villages led by David Zeisberger and other Moravian Christian missionaries. They spoke the Munsee and the Unami dialects of Delaware, an Algonquian language.

White Eyes, the Lenape chief who had negotiated the treaty, died in 1778, reportedly of smallpox. Years later, George Morgan, a colonial diplomat to the Lenape and Shawnee during the American Revolution, wrote to Congress that White Eyes had been murdered by American militia. Many Lenape at Coshocton eventually joined the war against the Americans. In response, Colonel Daniel Brodhead led an expedition out of Fort Pitt and on 19 April 1781 destroyed Coshocton. Surviving residents fled to the north. Colonel Brodhead convinced the militia to leave the Lenape at the Moravian mission villages unmolested since they were peaceful and neutral.

Brodhead’s having to restrain the militia from attacking the Moravian villages was a reflection of the brutal nature of frontier warfare. Violence had escalated on both sides. Relations between regular Continental Army officers from the East, such as Brodhead, and western militia were frequently strained. The tensions were worsened by the American government’s policy of recruiting some Indian tribes as allies in the war. Western militiamen, many of whom had lost friends and family in Indian raids against settlers’ encroachment, blamed all Indians for the acts of some.

In September 1781, British-allied Indians, primarily Wyandot and Lenape, forced the Christian Indians and missionaries from the Moravian villages. They took them northwest toward Lake Erie to a new village, called “Captive Town”, on the Sandusky River.

The British took the missionaries David Zeisberger and John Heckewelder under guard back to Detroit, where they tried the two men on charges of treason. The British suspected them of providing military intelligence to the American garrison at Fort Pitt. The missionaries were acquitted. (Historians have established Zeisberger and Heckewelder did keep the Americans informed of the movements of the British and their Indian allies.)

The Indians at Captive Town were going hungry because of insufficient rations. In February 1782, more than 100 returned to their old Moravian villages to harvest the crops and collect stored food they had been forced to leave behind. The frontier war was still raging. In early March 1782, the Lenape were surprised by a raiding party of 160 Pennsylvania militia led by Lieutenant Colonel David Williamson. The militia rounded up the Christian Lenape and accused them of taking part in raids into Pennsylvania. Although the Lenape denied the charges, the militia held a council and voted to kill them. Refusing to take part, some militiamen left the area. One of those who opposed the killing of the Moravians was Obadiah Holmes, Jr. Among his observations of the incident was that “one Nathan Rollins & brother had had a father & uncle killed took the lead in murdering the Indians, …& Nathan Rollins had tomahawked nineteen of the poor Moravians, & after it was over he sat down & cried, & said it was no satisfaction for the loss of his father & uncle after all”.[4] After the Lenape were told of the vote, they spent the night praying and singing hymns after requesting time to prepare for death. They spent the night in 2 buildings, one for men and one for women and children.

The next morning on 8 March, the militia brought the Lenape to one of 2 “killing houses”, one of men and the other for women and children. There the militia tied the Indians, stunned them with mallet blows to the head, and killed them with fatal scalping cuts. In all, the militia murdered and scalped 28 men, 29 women, and 39 children. They piled the bodies in the mission buildings and burned the village down. They also burned the other abandoned Moravian villages. Two Indian boys, one of whom had been scalped, survived to tell of the massacre.

Before burning the villages, they had looted, gathering plunder which they needed 80 horses to carry: furs for trade, pewter, tea sets, clothing, everything the people held. A few years late missionary John Heckewelder collected the remains of the Lenape and buried them in a mound on the southern side of the village.

Although many European-American settlers were outraged by the Gnadenhutten massacre, frontier people, embittered by the ferocious warfare, generally supported the militia’s actions. Despite talk of bringing the murderers to justice, no criminal charges were filed and the war rolled on.

The Lenape allies of the British sought revenge for the Gnadenhütten massacre. When General George Washington heard about the massacre, he ordered American soldiers to avoid being captured alive. He feared what the hostile Lenape would do to captured Americans.

Washington’s close friend William Crawford was captured while leading an expedition against Lenape at Upper Sandusky, Ohio. Crawford had not been at Gnadenhutten but was killed for revenge. After being ritually tortured by the Lenape and Wyandot, he was burned at the stake.[5]

Captain Charles Bilderback did participate in the Gnadenhutten massacre. In June 1782, he survived the Crawford expedition’s defeat, but seven years later in June 1789 he was captured by hostile Lenape in Ohio who tortured and killed him.[6] David Williamson, the officer who led the Gnadenhutten massacre, survived the 1782 Crawford expedition. In 1814, decades after the war, he died in poverty.

In 1810, Tecumseh reminded William Henry Harrison, “You recall the time when the Jesus Indians of the Delawares lived near the Americans, and had confidence in their promises of friendship, and thought they were secure, yet the Americans murdered all the men, women, and children, even as they prayed to Jesus?”[7]

A mission house and cooper’s shop were reconstructed on the site of the village. A monument was erected in honor of those massacred. The burial mound is present at the memorial site. The village site has been listed on the National Register of Historic Places.