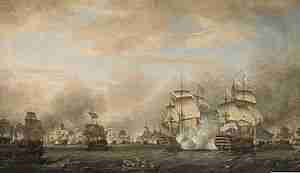 The Battle of the Saintes (known to the French as the Bataille de la Dominique, or Battle of Dominica) took place over 4 days, 9 April 1782 – 12 April 1782, during the American War of Independence, and was a victory of a British fleet under Admiral Sir George Rodney over a French fleet under the Comte de Grasse forcing the French and Spanish to abandon a planned invasion of Jamaica.

The battle is named after the Saintes (or Saints), a group of islands between Guadeloupe and Dominica in the West Indies. The French fleet defeated here by the Royal Navy was the same French fleet that had blockaded the British Army during the Siege of Yorktown. The British are sometimes credited with pioneering the tactic of “breaking the line” in the battle, though this is disputed.{citation needed|date=April 2013}

On 7 April 1782, the Comte de Grasse set out from Martinique with 35 ships of the line, including two 50-gun ships and a large convoy of more than 100 cargo ships, to meet with a Spanish fleet consisting of 12 ships of the line and 15,000 troops for the purpose of capturing the British island of Jamaica. He was pursued by Rodney with 36 ships of the line.

On 9 April 1782, De Grasse sent his convoy into Guadeloupe, escorted by two fifty-gun ships (Fier and Experiment). There was an initial inconclusive clash during which the French got the better of the van division of the British fleet that had become separated from the centre and rear divisions. Two French ships of the line were damaged.

On 12 April, De Grasse bore up with his fleet to protect a dismasted ship (Zélé”, 74-guns) that was being chased by four British ships as he made for Guadeloupe. Rodney recalled his chasing ships and made the signal for line of battle. As the French line passed down the British line, a sudden shift of wind let Rodney’s flagship Formidable and several other ships, including the Duke and the Bedford, break through the French line, raking the ships as they did so. The resultant confusion in the French line and the severe damage to several of the French ships including De Grasse’s flagship Ville de Paris, of 104 guns, led eventually to De Grasse’s surrender and the retreat of many of his ships in disorder. This action split the French battle line into two. A general chase ensued. In all, four French ships were captured and one, César”, blew up after she was taken.

The British lost 243 killed and 816 wounded, and two captains out of 36 were killed. The French loss in killed and wounded has never been stated, but of captains alone, six were killed out of 30. It is estimated that the French loss may have been as much as 2,000. More than 5,000 French soldiers and sailors were captured. The large number shows what a considerable force the French were willing to put ashore with the invasion of Jamaica. Of the Ville de Paris{‘} crew, over 400 were killed and more than 700 were wounded. The magazine aboard the César exploded, killing over 400 French and 50 British sailors.

The battle frustrated French and Spanish hopes of capturing Jamaica from the British. Rodney was created a peer with £2,000 a year settled on the title in perpetuity for this victory. Hood was elevated to the peerage as well.

The battle has caused controversy ever since, for three reasons:

* Rodney’s failure to follow up the victory by a pursuit was much criticised. Rear-Admiral Hood said that the 20 French ships would have been captured had the commander-in-chief maintained the chase. On 17 April, Hood was sent in pursuit of the enemy. He promptly captured two 64-gun ships of the line (Jason and Caton) and two smaller warships in the Battle of the Mona Passage on 19 April. One hundred and twenty years later, the Navy Records Society published the Dispatches and Letters Relating to the Blockading of Brest. In the introduction they include a small biography of Admiral William Cornwallis who commanded the Canada at the Saintes. A poem purportedly written by him includes the lines:

Had a chief worthy Britain commanded our fleet, Twenty-five good French ships had been laid at our feet.

* The battle is famous for the innovative tactic of “breaking the line”, in which the British ships passed though a gap in the French line, engaging the enemy from leeward and throwing them into disorder. But there is considerable controversy about whether the tactic was intentional, and, if so, who was responsible for the idea (Rodney, his Captain-of-the-Fleet Sir Charles Douglas, or John Clerk of Eldin), or even if this was the first case of such a tactic. Dano–Norwegian admiral Niels Juel did this in the Battle of Køge Bay more than a hundred years earlier and even earlier the Dutch admiral Michiel de Ruyter used it for the first time in the last day of the Four Days’ Battle in 1666 (and again in the Battle of Schooneveld and the Battle of Texel of 1673).{citation needed|date=December 2012}
* On the French side, de Grasse blamed his subordinates, Vaudreuil and Bougainville, for his defeat.