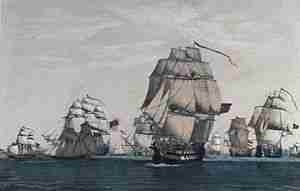 The Action of 9 August 1780 was a naval engagement of the American Revolutionary War in which the main Spanish fleet led by Admiral Luis de Córdova y Córdova, together with a squadron of French ships, captured a heavy British convoy of sixty-three vessels causing a severe blow to the commerce of Great Britain. The British convoy led by Sir John Moutray, captain of {HMS|Ramillies|1763|6} and three frigates sailed from Portsmouth in late July, and were intercepted on 9 August by the Spanish fleet. During the action the Spaniards managed to capture 55 of 63 vessels, making it one of the most complete naval captures ever made. This loss was still bitterly remembered in Great Britain thirty years later at the height of the Napoleonic Wars. The British financial losses were estimated at £ 1,500,000.

Besides the loss of the merchantships, 3144 men, and goods worth £1,5 million, the convoy’s capture offset Admiral Rodney’s victory in the Moonlight battle and helped derail a secret British diplomatic effort to make a separate peace with Spain.

On the morning of 2 August, the Channel Fleet fell in with a large outward-bound British convoy under the escort of HMS Ramillies and four frigates. This convoy sailed from Portsmouth and consisted of sixty three sail, including not only East and West India ships but also victuallers, military storeships, and transports carrying the 90th Regiment of Foot. The Channel Fleet accompanied the convoy for several hours to a point 112 leagues off the Isles of Scilly, where the two groups of ships parted company. Following the instructions given by Don Jose Moñino, count of Floridablanca to Luis de Córdova, the Spanish fleet put sail from Cádiz and sailed as far as Madeira and the Canary Islands, where Don Luís deployed several frigates to spot the convoy, being finally intercepted in the night of 9 August by one of the Frigates. The news were greeted with caution because there was doubt whether the sails detected corresponded to the Channel Fleet or whether it was the convoy heavily escorted. The second Spanish command, José de Mazarredo called immediately for an attack, which meant that there was no reason for the British fleet to risk themselves sailing so far from their coast. Proposing that all the suspected sails had to be escorted. The British mistook the lanterns at mast head of the Santísima Trinidad for those of their own commander, and fooled by a ruse of war steered accordingly. At break of day, they found themselves intermingled with the Spanish fleet. Admiral de Cordova enveloped them, and hoisted signals of general chase.

The convoy included, besides the merchantmen, eighteen victuallers, storeships, and transports, destined for the service in the West Indies; one of these was of particular importance, being laden with tents and camp equipage, for the troops designed for active service in the Leeward Islands. The five East India vessels, besides arms, ammunition, and a train of artillery, conveyed a large quantity of naval-stores, for the supply of the British squadron in that quarter.

These ships, and above fifty West Indiamen, including those chartered by the crown, were seized by de Córdova’s fleet. The five East Indiamen were the Gatton, Godfrey, Hillsborough, Mountstuart and Royal George, and their loss represented the worst disaster in history for the East India Company. The Mountstuart and Godfrey were shelled by the 120-gun ship of the line Santísima Trinidad, flagship of Admiral de Córdova, before surrendering to the Spanish. Gatton was also hit by the Purísima Concepción and set alight, but the fire was later put under control and the ship seized. A frigate flotilla, commanded by Santiago de Liniers and part of the Concepción squadron, captured the 30-gun Hillsborough. HMS Ramillies, two frigates and few West-India ships broke contact and sailed away. The official Spanish report identifies the frigates as the 36-gun HMS Thetis and HMS Southampton.

The captured British ships, numbering nearly 60, were brought into Cádiz, an unusual spectacle since the capture of such a great enemy convoy by any navy was an uncommon event; de Córdova’s fleet produced this feat upon two occasions. All the ships including the five East Indiaman were brought into the Spanish navy. This was a major intelligence failure, for the British Admiralty did not learn of the sailing of this enemy fleet until 4 August and neither Geary nor Captain John Moutray.

This Spanish victory, compounded by the serious storm losses in the Caribbean, produced a financial crisis among the marine insurance underwriters throughout Europe. Many went bankrupt, and war insurance rates, already remarkably high due to the menacing presence of privateers, were driven to intolerable levels. It also increased and made increasingly public the dissatisfaction which had before prevailed against the ministry, and against the conduct and government of the Royal Navy. The five British East Indiaman were brought into Spanish service, giving them an entire squadron of frigates. Thus, the 30-gun Hillsborough was commissioned in the Spanish navy as 34-gun Santa Balbina, the 28-gun Mountstuart as 34-gun Santa Bibiana, the 28-gun Royal George was brought into Spanish service as 40-gun Real Jorge, the 28-gun Godfrey commissioned as 34-gun Santa Paula and the 28-gun Gatton was brought into Spanish service as 30-gun Colón. The Spaniards behaved with great humanity to their prisoners, repaying the generous treatment which their countrymen had experienced from Admiral Rodney.