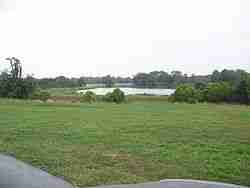 The Long Run Massacre occurred on 13 September 1781 at the intersection of Floyd’s Fork creek with Long Run Creek, along the Falls Trace, a trail in what is now eastern Jefferson County, Kentucky.

A day earlier, settlers at Painted Stone Station, established by Squire Boone, had learned that the fort was about to be raided by a large Indian war party under the command of British Captain Alexander McKee. Most chose to abandon that station for the better manned ones near Beargrass Creek, and had left the injured Boone and one other family behind. Some settlers hesitated for two days before moving toward Linn’s Station. Following the loss of part of their military guard, the party was ambushed at thirteen-mile tree, {convert|8|mi|km} from Linn’s Station. At least seven settlers were killed, Indian losses are unknown. The survivors fled and reached Linn’s Station by nightfall.

Despite historical markers and at least one published report that at least 60 people were killed and only a few escaped, only about 15 settlers were killed followed by 17 soldiers who went to bury their remains. Reenactments are held annually at Floyd’s Ford Park which is at the site of the massacre.