The Action of 18 October 1782 was a minor naval engagement of the American War of Independence, in which the French 74-gun ship of the line Scipion, accompanied by a frigate, was chased by two ships of the line, HMS London and Torbay. Outmanoeuvring her larger opponents, Scipion obtained a favourable position that allowed her to rake HMS London, causing severe damage and escaping.

The British resumed the chase, and Scipion struck a rock in Samana Bay, becoming a total loss. 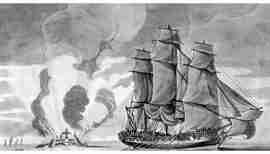