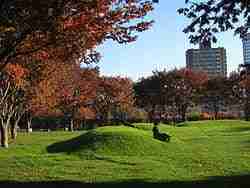 In a letter to Joseph Reed written at Cambridge in November 1775, George Washington wrote, “I have caused two three gun half moon batteries to be thrown up for occasional use.” The second three gun half moon battery was obliterated along with all other extensive siege works constructed by the British and Continental armies during the siege of Boston.{Citation needed|date=April 2010}

These batteries and other minor works are shown on a map engraved by Henry Pelham, made for the British in 1775 and 1776, and may well have been assumed by them to be of much greater importance than was actually the case.{Citation needed|date=April 2010}

At the time these little fortifications were constructed, Henry Knox was on his way to Fort Ticonderoga to get the best of the cannons which were there and at Fort Crown Point, a three-month exercise known as the noble train of artillery. The troops needed to be trained in constructing works in which the guns could be mounted promptly.

The property was acquired by the City of Cambridge and restored in 1857, at which time three 18 pound cannons from the old Fort Warren, located on Governor’s Island, were installed, and an elaborate granite and iron fence was designed by architect John R. Hall to protect the site.

A description of the property at the time of that transfer was later complied by local historians:

The city accepted this gift and with the assistance of Commonwealth of Massachusetts proceeded to restore the battery to its original condition, to build a substantial fence around it and to erect a flag-staff. The Secretary of War gave three thirty-pounder guns (actually, Eighteen Pound American guns), and the Secretary of the Navy gave the gun carriages. The Massachusetts State Legislature voted to appropriate the sum of $2000 “provided the city of Cambridge shall appropriate a sum sufficient to complete the said fence at a cost of not less than four thousand dollars and said Fort Washington shall always be accessible to the public, and that said city shall always keep the fence proposed to {sic|?|built,|reason=”to be built” would be correct here} in good repair.”}}

The Cambridge city directory 1861 reported the earthworks to be five years old in appearance and in excellent condition and the total cost of Fort Washington Park, was $9,504.05. In 1965 the state passed legislation authorizing the city of Cambridge to transfer the park to the United States government as a historic landmark.

The property remains a city park and is designated an historic district of the City of Cambridge. The park was rededicated on October 3, 2009, Cambridgeport History Day, following restoration work. What remains today are grassy embankments, not fortifications as such.

The three 18-pounders were among those over-age cannon that were removed from the original Fort Warren on Governor’s Island, when a new Fort Warren was built on George’s Island. Mr. Marcus Morton, of Cambridge, learned by correspondence with the Historical Section of the Chief of Ordnance in Washington, in 1942, that the gun carriages were cast by the West Point Foundry on the Hudson River, and he discovered in the city records that it cost the city $13.50 to bring these guns from Governor’s Island to Cambridge.