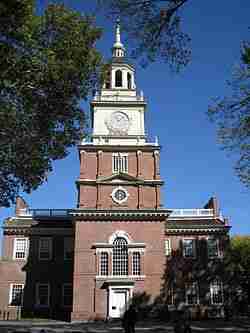 Independence Hall is the centerpiece of Independence National Historical Park in Philadelphia, Pennsylvania, United States, on Chestnut Street between 5th and 6th Streets. It is known primarily as the location where both the Declaration of Independence and the United States Constitution were debated and adopted.

The building was completed in 1753 as the colonial legislature (later Pennsylvania State House) for the Province of Pennsylvania. It became the principal meeting place of the Second Continental Congress from 1775 to 1783 and was the site of the Constitutional Convention in the summer of 1787. The building is part of Independence National Historical Park and is listed as a World Heritage Site.

By the spring of 1729 the citizens of Philadelphia were petitioning to be allowed to build a state house. Two thousand pounds were set aside for the endeavor. A committee was formed composed of Thomas Lawrence, Dr. John Kearsley, and Andrew Hamilton with the responsibility of selecting a site for construction, acquiring plans for the building, and contracting a company for the purpose of construction. Hamilton was, along with William Allen, named a trustee of the purchasing and building fund and authorized to buy the land that would be the site of the state house. By October 1730 they had begun purchasing lots on Chestnut Street.

By 1732, even though Hamilton had acquired the deed for Lot no.1 from surveyor David Powell, who had been paid for his work with the lot, tensions were rising among the committee members. Dr. John Kearsley and Andrew Hamilton disagreed on a number of issues concerning the state house. Kearsley, who is credited with the designs of both Christ Church and St. Peter’s Church, had plans for the structure of the building but so did Hamilton. There were also differences between the two men on where the site of the building would be; Kearsley suggested High Street, now Market Street, and Hamilton wanted the site to be on Chestnut Street. Lawrence said nothing on the matter.

The matter reached a point where arbitration was needed. On August 8, 1732 Andrew Hamilton brought the matter before the House. He explained Kearsley did not approve of either Hamilton’s own plans for the location of the state house or its architecture and went on to insist the House of Representatives had not agreed to these decisions. In response to this, Hamilton, on August 11, showed his plans for the state house to the House of Representatives, which they accepted. On August 14, the House sided with Hamilton, granting him full control over the project, and the site on the South side of Chestnut Street between Fifth and Sixth streets was chosen for the location of the state house. The ground was broken for construction soon after.

The State House was built between 1732 and 1753, designed by Edmund Woolley and Andrew Hamilton, and built by Woolley. Its construction was commissioned by the Pennsylvania colonial legislature which paid for construction as funds were available, so it was finished piecemeal. It was initially inhabited by the colonial government of Pennsylvania as its State House, from 1732 to 1799.