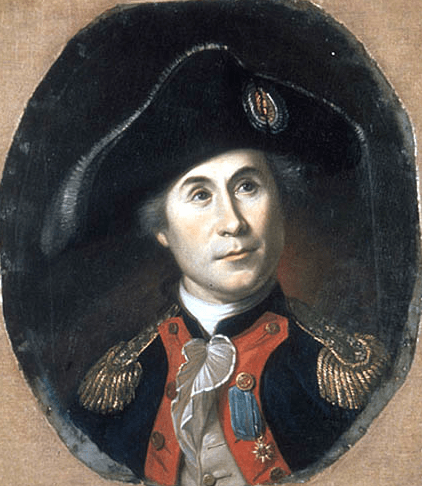 John Paul Jones was born in Scotland and went to sea as an apprectice.  He would soon be the captain of his own trading ship.  He fled to America in 1775 amid controversy that some of his command decisions led to the death of some sailors.  In America he was given a Continental Navy appointment and he would lead raids against the British.  He is most famous for his fight and defeat of the British ship Serapis – outgunned, outmanned, and his ship sinking, his crew fought valiantly, one sailor strategically throwing a grenade that set gunpowder ablast on the Serapis injuring many of it’s sailors and allowing the Continental forces an opening to turn the battle in their favor.  He would move to France after the American Revolution, and his remains rest in the chapel at the U.S. Naval Academy in Annapolis, Maryland, USA.  For source and more details, click here.