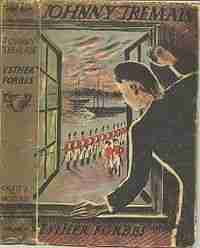 Johnny Tremain is a 1943 children’s fiction historical novel by Esther Forbes set in Boston prior to and during the outbreak of the American Revolution. The novel’s themes include apprenticeship, courtship, sacrifice, human rights, and the growing tension between Whigs and Tories as conflict nears. Events described in the novel include the Boston Tea Party, the British blockade of the Port of Boston, the midnight ride of Paul Revere, and the Battles of Lexington and Concord.

The book won the 1944 Newbery Medal and is the 16th bestselling children’s book as of the year 2000 in the United States, according to Publishers Weekly. In 1957, Walt Disney Pictures released a film adaptation, also called Johnny Tremain.

The story begins in the Boston, Massachusetts silversmith shop of Ephraim Lapham, where protagonist Johnny Tremain is a promising apprentice. The Lapham shop soon receives a challenging order from wealthy merchant John Hancock. While preparing Hancock’s order, Johnny’s hand is badly burned because of Dove, another apprentice under the same roof, who gives him a cracked crucible during the order – working on a Sunday, his hand is crippled beyond use. With only one good hand, Johnny can no longer be a silversmith. He is forced to find a living elsewhere. It is later learned that the injury is not as severe as he is told and can be fixed with minor surgery.

After a series of rejected jobs, Johnny Tremain turns to Mr. Lyte, a successful businessman. After explaining that his mother told him that he and Mr. Lyte were related, Johnny is asked to prove this relationship by showing Mr. Lyte the silver family cup with the family’s coat of arms. The next day, Johnny brings the cup, but Lyte claims it to be stolen from him; Johnny is arrested. Eventually, Johnny is freed by the court’s decision. Finally, Johnny settles into a job with a newspaper, the Boston Observer. The Observer is a Whig publication, and under its employment Johnny is introduced to the larger world of pre-revolutionary Boston politics. As months go by and tension between Whigs and Tories rises, Johnny evolves to become a dedicated Whig himself. Johnny matures and reevaluates many personal relationships, including that with Cilla, who becomes a trusted friend and fellow Whig.

The novel reaches its climax with the outbreak and immediate aftermath of the Battles of Lexington and Concord.

The novel concludes on a note of hopefulness for the future. Although the beginning of the war has brought great death and destruction, American Patriots have defeated the British army and surrounded Boston.

The novel features both fictional and historical characters.

Johnny Tremain -The story’s protagonist. At the beginning of the story, he is 14 years old and is apprenticed to silversmith Ephraim Lapham. His hand was badly injured by an accident, therefore he could no longer work in the silversmith business.

Rab Silsbee – Johnny’s friend and role model, and is the wise man of the town. He is smart, brave, and everyone looks up to him, including Johnny. Rab is two years older than Johnny. He introduces Johnny to the politics of Boston. He treats Cilla kindly, but it is not made clear whether his feelings for her are romantic or platonic. He takes part in the Battle of Lexington and dies at the end of the story.

Priscilla Lapham – “Cilla” is slightly younger than Johnny. Over time, Cilla and Johnny develop genuine love for each other. Cilla was engaged to marry Mr. Tweedie, but the engagement was called off. She is Mrs. Lapham’s third daughter.

Isannah Lapham – “Izzy.” The youngest daughter of Mrs. Lapham, Isannah is a beautiful but sickly girl and must be cared for at all times. Once-sweet Isannah is eventually selfish and vain, and beloved by her older sister, Cilla. Isannah’s golden-haired, brown-eyed, beauty attracts a great deal of attention, most significantly from Lavinia Lyte. Lavinia takes Isannah into her care and introduces her to high society, separating her from her family and their working-class way of life.

Ephraim Lapham – A Boston silversmith, and Johnny’s master at the beginning of the novel. Mr. Lapham is pious and kind, but old, frail, and no longer the master smith of his youth and unfortunately dies towards the middle of the book.

Mr. Tweedie – A 40-year-old from Baltimore, Maryland who becomes Mr. Lapham’s business partner after Johnny’s accident. Tweedie is a “queer” man, unliked by many. Johnny calls him a “Squeak-Pig”.

Mrs. Lapham – later Mrs. Tweedie – Ephraim Lapham’s daughter-in-law. Mrs. Lapham is a dedicated, hardworking mother and a no-nonsense taskmaster to the apprentices. She works as the housekeeper in Mr. Lapham’s house and shop. Near the book’s end, she marries Mr. Tweedie to keep the silversmith shop in the Lapham family.

Dorcas Lapham – Mrs. Lapham’s second daughter. Although Dorcas longs to be elegant and sophisticated, she falls in love with the poverty-stricken Frizel, Jr., and elopes to avoid marrying Mr. Tweedie.

Madge Lapham – Mrs. Lapham’s oldest daughter. Like Mrs. Lapham, Madge is tough and capable. She falls in love and elopes with Sergeant Gale, a British soldier. Madge, like Dorcas, was engaged to marry Mr. Tweedie. She eloped with Sergeant Gale to avoid marrying Tweedie.

Dove – An apprentice in the Lapham shop and rival of Johnny whose first name had been forgotten. Later in the book Dove takes a job caring for British officers’ horses during Boston’s occupation. Dove both envies and looks up to Johnny. He attempts to steal tea during the Boston Tea Party.

Mrs. Jenifer Lorne – Mr. Lorne’s wife and Rab’s aunt. Mrs. Lorne sees through Johnny’s arrogant exterior to treat him as a lonely boy. She becomes like a mother to him.

Jonathan Lyte – A wealthy Boston merchant and Johnny’s great-uncle. Crooked and cruel, Lyte tries to make a profit by making friends on both sides of the colonial struggle, the Loyalists and the Patriots, but as tensions mount in Boston, Lyte is exposed as a Tory (Loyalist). On the eve of war, Lyte and his family depart for London.

Lavinia Lyte – Jonathan Lyte’s beautiful daughter. Lavinia is the most desirable socialite in Boston. Enchanted by Isannah’s ethereal beauty, Lavinia Lyte takes the child away from her family to live amidst the wealth of the Lyte household as a sort of pet. She is also Johnny’s cousin, which she reveals at the end of the book. Johnny has a romantic interest in her, but he pretends to strongly dislike her to hide this.

Mrs. Bessie – The Lytes’ cook and Cilla’s only friend in the Lyte household. Mrs. Bessie is an ardent Whig and a confidante of Samuel Adams, but she nonetheless remains loyal to her Tory employers. When the Lytes leave Boston, Bessie and Cilla look after their house. Johnny admires Mrs. Bessie.

Vinny Lyte Tremain – Johnny’s mother, and wife to Charles Tremain. She dies before the novel begins. She was born Lavinia Lyte, like Merchant Lyte’s daughter.

Charles Tremain – Johnny’s father. Charles Tremain, known in Boston as Charles Latour, was a French soldier and military surgeon taken as a British prisoner during the French and Indian War. While he was held as a prisoner in Boston he met and wooed Johnny’s mother. After they married, Johnny’s parents traveled to France, where Charles died of cholera.

Lydia – The African washerwoman at the Afric Queen, a tavern where many British officers sleep. Lydia is a rebel sympathizer who, because of her connection to the British soldiers, gathers information for the rebel forces. She is described as handsome by Johnny.

Sewall – A poor relative of the Lytes who works as a clerk in Jonathan Lyte’s office. Sewall is kind and brave; he runs off to join the Minute Men and becomes the owner of the Afric Queen after the war.

Pte Pumpkin – A British soldier stationed in Boston. Pumpkin’s dream is to own a piece of land and homestead a farm. Because he is poor, he can only achieve his dream in America. Johnny helps him desert from the army, but Pumpkin is captured and executed by a firing squad.

Sergeant Gale – A British Non Commissioned Officer who marries Madge Lapham, Mrs. Lapham’s eldest daughter. He is noted to be short but tough.

Lieutenant Stranger – A friendly but often arrogant British officer stationed in Boston. He develops a strained friendship with Johnny. He is young and reminds Johnny a lot of Rab.

John Hancock – One of the wealthiest men in Boston and a leader of the Whigs. Johnny disfigures his hand while making a silver basin for him.

Doctor Joseph Warren – One of the leaders of the Whigs in Boston. In the novel’s climax, he is shown preparing to operate on scar tissue in Johnny’s disfigured hand. Foreshadowing indicates that the operation will be a success, allowing Johnny to enlist in the rebel army. Actor Walter Coy played the part of Warren in the film Johnny Tremain.

Paul Revere – The best silversmith in Boston and an important Whig, known to American history for his midnight ride to caution the Minutemen of approaching British soldiers.

James Otis, Jr. – A lawyer and architect of the ideals of the American Revolution; his career was short by neurological health challenges. In the novel, Otis inspires the Whig leaders to fight for the rights of all people, not just Americans. He warns that some will give their lives, foreshadowing the death of Rab.

Governor Thomas Hutchinson – The governor of Massachusetts prior to the occupation by the British army.

Thomas Gage – British General and military governor of Boston during the occupation.

John Pitcairn and Francis Smith – British commanding officers at the Battles of Lexington and Concord.

Josiah Quincy II- The young lawyer and member of the Sons of Liberty who defends Johnny in court when accused of theft by the Lytes.

The book was referenced in The Simpsons episode “Whacking Day.” Marge wanted Bart to read Johnny Tremain, but he refused. But Marge convinced him when he said that Johnny’s hands were deformed. Bart thinks the story should’ve been called “Johnny Deformed.”