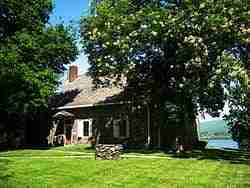 Washington’s Headquarters State Historic Site is a historic site in Newburgh, New York, USA. It consists of the Hasbrouck House, the longest-serving headquarters of George Washington during the American Revolutionary War, and three other structures.

It is also the oldest house in the city of Newburgh, and the first property acquired and preserved by any U.S. state for historic reasons. For both that and its historic value it was designated a National Historic Landmark in 1961.

==History of the house==

The first fieldstone farmhouse on the site may have been built in 1725 by Burger Mynderse. The property was sold to Elsie Hasbrouck, and she in turn gave it to her son, Jonathan, who married Catherine (Tryntje) Dubois and they built the existing structure on the original foundation, if any, in 1750. The house was surrounded by a large stock farm. The home underwent two significant enlargements before it was completed in 1770. The home has an original “Dutch Jambless” fireplace. A temporary kitchen was built by the army upon their arrival in 1782. Changes were made inside the house including the addition of an “English” style fireplace in the General’s bedroom. Existing buildings such as stables and barns were also enlarged and improved on the site. Most Army buildings were removed by the Quartermaster-General’s Office at the end of the war, with the exception of a “Ho:(use) in the garden”, which was given to Mrs. Hasbrouck. It no longer exists.

In 1850, it was acquired by the State of New York and became the first publicly operated historic site in the country. Today, it is a museum furnished to recreate its condition during the Revolutionary War. It covers an area of about seven acres (2.8 ha), with three buildings: Hasbrouck House, a museum (built in 1910), a monument named the “Tower of Victory”, which was completed in 1890 after four years of construction in order to commemorate the centennial of Washington’s stay, and a maintenance shed/garage built in the Colonial Revival style in 1942.

Also on the property is the grave of Uzal Knapp, one of the longest-lived veterans of the Continental Army. For many years it was believed that he had served as one of Washington’s personal guards, but more recently historians have come to doubt this. The gravestone, though simple, is the work of the Studio of Henry Kirke Brown.{Citation needed|date=January 2011}

There is a statue entitled “The Minuteman”, by Henry Hudson Kitson, that was erected on the grounds on November 11, 1924.

The site was declared a National Historic Landmark in 1961. It is also one of the more than 2,000 contributing properties to the East End Historic District, the most of any district in the state.

Hasbrouck House served as Washington’s headquarters during the Revolutionary War from April 1782 until August 1783. It was chosen for its comparatively safe location north of the strategically important West Point. The 7,000 troops of the Continental Army were encamped near what is today known as Vails Gate, a few miles to the southwest.

In the headquarters at Hasbrouck House, Washington rejected a suggestion to institute an American monarchy and defused the threat of a mutiny among his officers over pay and pensions. He also created and first awarded the Badge of Military Merit which became the forerunner of the Purple Heart. On April 19, 1783, he issued an order for the “cessation of hostilities”, which formally ended the fighting of the Revolutionary War.

The Washington’s Headquarters State Historic Site is located on Liberty Street in downtown Newburgh. It is several blocks from the Hudson River and enjoys a commanding view of it and Beacon Mountain beyond.

Although owned by New York’s Office of Parks, Recreation and Historic Preservation, the site, like all other NYSOPRHP properties on the west side of the mid-Hudson region, is operated by the Palisades Interstate Park Commission.